Bennett awarded OBE for his contribution to height safety work 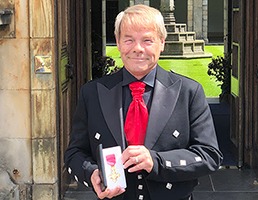 Peter Bennett has been awarded an OBE for his work in preventing falls from height in workplaces.

Bennett, 59, who is from Glasgow, was presented with the award by the Queen at the Palace of Holyroodhouse, Edinburgh, last week.

On average, 36 people die every year following a fall from height at work, according to figures released by the Health and Safety Executive last week.

After studying at the University of Glasgow, Bennett joined the Glasgow office of national scaffolding company Stephens & Carter in 1983 before moving to Turner Access. During this time, he was an active council member and latterly chair of PASMA (Prefabricated Access Suppliers' & Manufacturers' Association). He also served as a council member, training committee chairman and president of IPAF (the International Powered Access Federation).

Bennett has improved safety for those who work at height in many different sectors across the UK and internationally.

Safety standards, regulation and workplace culture have improved hugely during his years of serving to protect workers and as a leading expert and champion for progress.

Bennett is now managing director of PASMA, the only organisation in the world dedicated to advancing safety, standards and best practice in the mobile access tower industry.

When Bennett first took on the role in 2006, he ran the organisation from his garage at home with the help of his first employee, Karen O'Neill. Under his leadership, PASMA now has a presence in 11 countries worldwide; at least 350 members and almost 75,000 people now take its training courses on the safe use of towers every year. O'Neill is now part of a 22-strong secretariat.

In 2007 Bennett was also appointed executive director of The Ladder Association. He is also chair of the Access Industry Forum (AIF), which brings together the principal trade associations involved in work at height to foster codes of good practice, equipment standards, training, education and knowledge.

Bennett was also involved in the creation of the All-Party Parliamentary Group on Work at Height in 2017, chaired by Alison Thewliss MP, which is pushing for improved regulation to prevent serious injuries and fatalities. He is also a founding trustee of the No Falls Foundation, the only charity dedicated to preventing falls from height and helping people affected by the consequences of a fall.

Bennett also serves on several national and international standards-setting committees, sits on various advisory groups at the Health and Safety Executive (HSE), and contributes to the work of the Better Regulation Panel at the Department for Business, Energy and Industrial Strategy (BEIS).