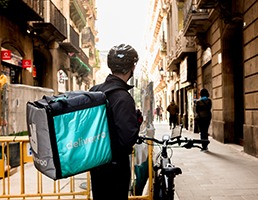 The number of people doing gig economy work has doubled over the past three years, according to research supported by the Trades Union Congress (TUC) and  pan-European think tank the Foundation for European Progressive Studies (FEPS).

Most do not do this kind of work full-time. Instead, this 'platform work' is used to supplement other forms of income.

The term 'platform work' covers a wide range of jobs that are found through a website or app - like Uber, Handy, Deliveroo or Upwork - and accessed using a laptop, smartphone or other internet-connected device.

The survey also suggests that:

Younger workers are the most likely to work in the gig economy. Nearly two-thirds (60%) of intensive (at least once a week) platform workers are aged between 16 and 34.

One in 7 (15.3 per cent) of the working-age population surveyed - equivalent to nearly 7.5 million people - have undertaken platform work at some point.

6 in 10 respondents report buying the services of a platform worker at some point.

A fifth (21%) of UK workers surveyed are notified digitally if work is waiting for them and a quarter (24.6%) use apps or websites to record the work they've done. Close to half of both groups were not platform workers, suggesting that gig economy practices are spreading to the wider economy.

Ursula Huws, professor of labour and globalisation at the University of Hertfordshire, said: "In a period when wages have been stagnant, people are turning to the internet to top up their earnings. We see the Uber drivers and food delivery workers on our streets every day. But they're only a small proportion of gig workers. They're outnumbered by an invisible army of people working remotely on their computers or smartphones or providing services in other people's homes. These results underline how important it is to tackle low pay and precariousness. But they also suggest that we need a new deal to provide basic rights for all workers in the digital age."

Justin Nogarede, digital policy adviser at FEPS, said: "Our research shows high levels of platform work across Europe. The latest survey results from the UK confirm this and indicate that platform work is gaining in importance. It's high time to enact policies to ensure platform workers have access to social protection. We should break the link - often portrayed as inevitable - between platform work and precariousness."

The survey was carried out by the University of Hertfordshire with fieldwork and data collection by Ipsos MORI.