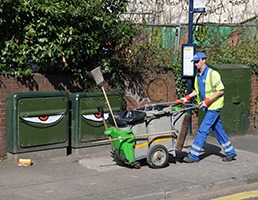 The Labour Party has announced that if it comes into power it will encourage councils to bring services in-house.

Labour said its plans would "roll back decades of orthodoxy that have seen local councils forced into outsourcing the delivery of key public services to private companies, including construction and maintenance work, bin collections, cleaning, school dinners, playing field maintenance and the management of local leisure centres".

Unveiling its strategy, Labour also criticised the legacy of decades of outsourcing in local government, with private companies failing to uphold their contracts to deliver services, standards deteriorating and the taxpayer picking up the bill.

The new plans show that Labour would:

 Legislate to ensure that local authorities review all service contracts when they expire;

 Legislate to create a presumption that service contracts will be brought back in-house and delivered by the public sector unless certain conditions and exemptions are met;

 Empower citizens and community groups by giving them the right to request information from councils showing that any outsourcing decision is consistent with these criteria;

 Transform the legislative framework around outsourcing contacts by making them subject to the Human Rights Act and the Freedom of Information Act and introducing a new set of minimum standards in contracts where outsourcing has to continue, including a fair wage clause, trade union recognition, support local labour and supply chains, annual gender pay audits and time-limited contracts;

 Support local government to deliver these changes by providing a model contract (to save councils time and resources), access to the government legal department for contract management, and greater support for collaboration among councillors.

Labour made the announcement in its blueprint Democratising Local Public Services: A Plan for Twenty-First Century Insourcing.

Shadow chancellor John McDonnell MP said: "After year upon year of failures, the public has rightly lost confidence in the privatisation of our public services and the carve-up of the public realm for private profit.

"The government's ideological pursuit of privatisation and outsourcing has seen the public pay the price as fat-cat bosses count their profits.

"It's time to end the outsourcing scandal which has seen private companies rip off the taxpayer, degrade our public services and put people at risk whilst remaining wholly unaccountable to the people who rely on and fund these services."