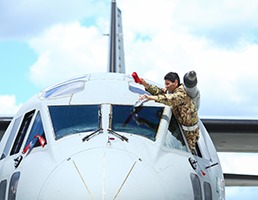 Support services provider Mitie has launched new initiatives to support veterans, reservists and families of those working in the armed forces, and it says it will recruit more individuals from the armed forces community.

A signatory of the Armed Forces Covenant, Mitie employs hundreds of veterans and reservists. But it has also created the Armed Forces Careers Portal to encourage recruits from military background to explore career opportunities in FM at Mitie.

The portal provides advice, guidance and veteran success stories, as well as vacancies from around the country.

Mitie has also set up its Armed Forces Network - for its employees from the armed forces community - to provide a forum for shared experiences in the hope that it will bring about positive change.

Charles Antelme DSO, head of defence at Mitie, said: "This is just the beginning, but through these and other new initiatives, we are building on our Covenant commitments as we look to inspire more people with a military background to bring their specialist skills and expertise to Mitie."