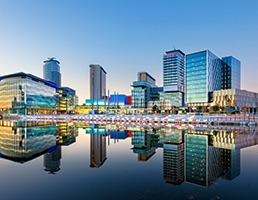 Take-up across the Big Nine regional office markets amounted to 2.3 million square feet during Q2, 10 per cent up on the 10-year average, according to the latest update from Avison Young.

Activity was skewed towards larger deals, city centre markets and the 'modern' sectors of flexible workspace and technology, media and telecom (TMT).

There were over 600,000 square feet of flexible workspace deals, similar to the annual totals of the previous two years, including the two largest deals in the regional markets.

In addition, there were two further lettings to WeWork in Birmingham and the sector accounted for more than a third of city centre take-up in Bristol, Edinburgh, Liverpool and Manchester.

Headline rents continue on an upward trajectory and have reached a new average high of £30.56 per square foot across the Big Nine cities.

Big Nine office investment volumes during Q2 amounted to £575 million, 5 per cent up on the 10-year quarterly average.

Overseas investment continues to drive the market, accounting for 85 per cent of transactions during Q2.