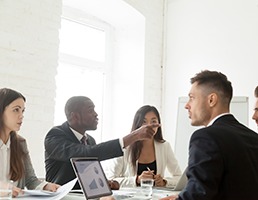 UK workers are increasingly engaging in political chatter in offices, according to career website Jobsite.

Just under half (46 per cent) claim they have noticed "a significant increase in political discussions being had by colleagues", the survey revealed.

Despite once being considered the ultimate professional faux pas, new research from Jobsite has found that political discussion has entered workplaces in a big way as a direct result of the EU referendum, President Donald Trump and the Conservative Party leadership contest.

Even those topics likely to reveal political rifts between colleagues remain on the table. More than two-thirds said they're comfortable talking about the divisive new Prime Minister Boris Johnson (68 per cent). The figures come as part of a wider report examining the attitudes of US and UK workers when discussing politics in the workplace.

Workers in the UK are not afraid to voice their opinions, with three in five comfortable discussing key issues of the day.

Climate change (74 per cent), US presidents (Trump 66 per cent and Obama 68 per cent) and the ongoing drama of the Conservative Party (64 per cent) top the list of topics Brits are most comfortable discussing with colleagues. Brexit is an exception with the topic discussed by one in four.