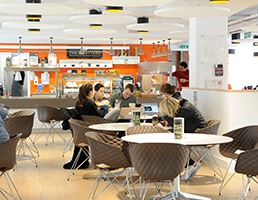 Sodexo has won a three-year catering contract extension at City, University of London, with the potential for a further five-years.

Sodexo has been the university's catering partner since 2014,  providing services at the main Northampton Square campus.

The service provider opened a Crussh outlet in the university's main building in Northampton Square in London serving a wide range of Crussh's healthy food and drinks.

As part of the new contract, Sodexo will relaunch the main restaurant with new offerings such as its street food Planted! and Dough & Go pizza, as well as Starbucks coffee at the university's courtyard café.

At Cass Business School's Bunhill Row and Aldersgate sites, Sodexo's offering will include street food-style menus and cuisine from around the world.