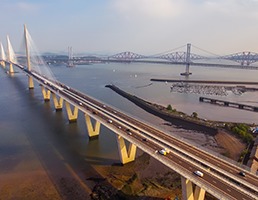 Bilfinger UK has been awarded multi-million-pound contracts to deliver maintenance services for global chemical producer INEOS at two sites in Scotland that will see it double its own workforce in the region and secure existing roles.

The agreements, which will run initially until 2021, will see Bilfinger deliver scaffolding access, insulation, painting, asbestos management and passive fire protection services to the INEOS chemical infrastructure assets in Grangemouth on the Firth of Forth and the Forties Pipeline System (south) assets at Kinneil.

The contract covering INEOS' chemicals assets represents a new agreement for the business and includes the option of a two-year extension. Bilfinger will employ 110 people at the site, which is one of INEOS' largest manufacturing sites globally, producing 1.3 million tonnes of chemical products each year.

The Forties Pipeline System contract is an extension of a previous agreement signed in 2017, where Bilfinger currently employs 110 people. The pipeline system transports up to 40 per cent of the UK's crude oil from the North Sea to INEOS' processing facility at Kinneil, close to the Grangemouth Refinery. Under the contract, Bilfinger UK will deliver maintenance services to a number of onshore assets that form part of the Forties Pipeline System.

Phill Maurer, managing director for Bilfinger UK, said: "The INEOS Grangemouth site and the co-located Forties Pipeline System Kinneil asset is a large, complex facility that presents significant opportunities from a maintenance perspective. We have developed a programme of support that puts safety first, while delivering high levels of efficiency. Our maintenance concept will help underpin the reliability and productivity of the plants."

Bilfinger UK has also secured a £5 million contract with INEOS Nitriles to a deliver a plant turnaround project at the firm's seal sands production site in Teesside. Bilfinger will plan and manage the HMD Plant inspection and maintenance work, which will include mechanical, electrical and instrumentation engineering, in addition to providing scaffolding, insulation and painting services.