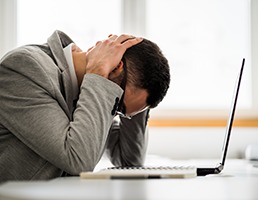 Workers are taking an average of four 'mental health days' a year but lying about it to their boss for fear of being judged, demoted or sacked.

The research by commissioned by law firm Slater and Gordon shows that more than half of employees who took mental health days faked a physical illness to explain their absence, despite stress from work souring relationships and sleep patterns for many.

The research polled 2,000 people of working age from around the UK.

A mental health day is a sick-day taken to look after psychological wellbeing; this could include seeing a counsellor or taking time to reduce stress and anxiety before it becomes overwhelming.

In the past five years, a quarter of the sample polled admit leaving at least one job owing to pressure and the negative impact it was having on their mental health. One in six is still in a role causing them burnout, stress and anxiety.

The research shows the balance between how mental health is treated compared with physical health remains skewed. Peter Lyons, employment liability lawyer, at Slater and Gordon said: "We speak to a lot of people who are feeling so stressed and anxious with work they are forced into taking mental health days.

"Many isolate themselves, trying to work harder, which causes their personal lives to suffer and mental health to deteriorate further. The biggest thing we would say is, don't fight stress alone at work.

"Keep detailed notes of what is causing stress and anxiety, then speak to a trusted colleague or manager to create a plan to tackle the issues. Union representatives or legal advisers specialising in this area can also provide guidance."

He added: "If staff do not even feel supported enough to seek help without fear of prejudice that's a huge concern. When workers are honest with their boss, 14 per cent said they are told to 'man up' and 13 per cent are fired, forced to leave or demoted from their roles.

Many recognised that their mental health wasn't as good as it should be, nor was their workplace's attitude towards it, with 65 per cent calling for more support to be provided.

Poor mental health formed at work was following people home, with two in five workers admitting that stress from their jobs has a negative impact on their mental health.

Over a third of people (37 per cent) struggled to switch off at night or over the weekend, and 60 per cent suffered with 'Sunday dread'.

The most common contributors to this are pressure from above (53 per cent) and unrealistic deadlines (42 per cent). The average person also spent an additional 27 unpaid minutes each day working, adding up to two-and-a-half extra weeks of work a year.