co-working is set to rise 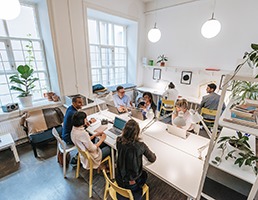 Co-working is set to rise by 50 per cent around the world by 2020, according to a Co-working Space Index compiled by games room retailer Liberty Games.

Liberty Games analysed the number of WeWork offices around the world, along with the average price to rent a hot-desk and a private office, to find out which cities are the best for co-working.

The analysis found that New York City had the most co-working spaces - 60 in total, four of which had a games room to allow workers to relax.

It found that the Indian city of Bengaluru is the cheapest city in which to rent both a private office and hot-desk in a co-working space - a hot-desk costs £106 a month, and a private office costs £249 a month.

Tokyo in Japan is the most expensive city in which to rent a co-working space - a hot-desk costs £511 a month, and a private office costs £14,522 a month.