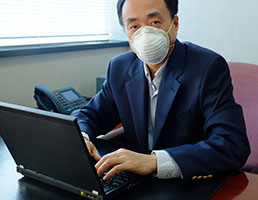 Flexible working, sharing information about local clean air routes and incentivising active travel are all matters where businesses need to do more to protect staff at work and on their commute, according to environmental charity Hubbub.

The study, released by Hubbub as part of its #AirWeShare campaign, found that more than two-thirds of workers in the UK believe employers should take responsibility to ensure that the air their staff are breathing in the workplace is safe.

Six in 10 workers believe that their employer has no policy at all, and two in 10 simply do not know. One in 10 said they think their employer has a policy, but it was not communicated to staff. Fewer than one in 10 receives regular communication from bosses on the issue.

Professional drivers and outdoor workers are among the most exposed professions, but office employees can also be exposed to high levels of pollution if they are commuting into busy urban areas and travelling to and from work meetings. Nearly half (46 per cent) of those surveyed think employers should take more responsibility to protect staff on their commutes.

Health analysis is increasingly showing that air pollution can affect all organs of the body over the course of a lifetime. Recent revelations include links to reduced cognitive abilities, diabetes, and the first direct evidence of pollution particles in mothers' placentas.

Given that the average British worker spends nearly 85,000 hours at work during his or her lifetime, and more than 14,000 hours getting there and back, it is clear that businesses have a significant role to play in addressing this public health crisis, says Hubbub.

The charity is calling on all employers to check, update - or even develop from scratch - a policy on air pollution to protect the health and wellbeing of their staff. As well as reducing exposure, policies should look at how businesses could reduce their own contribution to air pollution across their operations.

Hubbub is also asking more businesses to step forward to join the #AirWeShare movement to accelerate the process of cleaning up the air in our cities.

Trewin Restorick, founder and CEO of Hubbub, said: "Employers have a huge role to play in protecting their workforce from pollution, whilst in the workplace and travelling during the working day and on the commute. Our research suggests that many employers either have no policy on this or are simply not communicating it.

"We want to empower workers to ask their bosses what they are doing to protect them and to request that changes are made if they are falling short. And businesses need to show that they are willing to take action to support and protect their workforce from the effects of air pollution."