British Council for Offices crowns the best of British workspaces 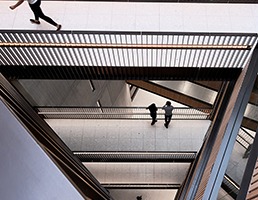 2 Television Centre was heralded the 'Best of the Best' at the British Council for Offices' (BCO) National Awards in the capital this week. It also took the 'Commercial Workplace' award.

The building was formerly BBC TV Centre, where some of the corporation's most famous shows were made, including Fawlty Towers, Monty Python's Flying Circus, Blue Peter and Absolutely Fabulous.

The development was joined by six other award-winners recognised as examples of excellence in office space.

 'Best of the Best' and 'Commercial Workplace': 2 Television Centre, London

The BCO's National Awards programme recognises "top-quality office design and functionality and sets the standard for excellence across the office sector in the UK".

About the main winners:

The winner, 2 Television City, in White City, has "innovative amenities including a top-level swimming pool, a variety of workspaces and an impressive exterior that fits seamlessly with its surrounding site".

Janet Nash House is the new European HQ for City Electrical Factors and the materials used throughout are a celebration of its occupier's trade, mirroring the electrical cable. The office has been built to combine a variety of workstations that have allowed the occupier to bring together all of its departments into one central location - two distinctive blocks accommodate different working needs while a central atrium creates "a sense of community and connectedness between the two".

Hanover in Manchester is a reworking of a grade II listed building in the heart of the city. The site's careful restoration "has successfully blended the heritage of the site with a contemporary design" said the judges.

Ingenuity House won the Innovation Award and the office focuses on health and wellbeing to create a community from what was previously a disparate network of regional offices. The judges agreed that "the greatest innovation is the provision of an intelligent occupier analysis system that allows the occupier Interserve to adjust core FM settings to maximise the use of space and minimise energy consumption".

London (Greater)
Up to £47,276 per annum plus excellent benefits
Reference
59097
END_OF_DOCUMENT_TOKEN_TO_BE_REPLACED