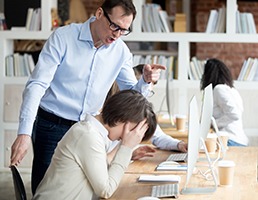 Less than half of workers with bad managers feel they can approach their boss with problems, according to research by behavioural assessment specialist the Predictive Index.

However, a massive 96 per cent of employees with good managers feel that they can. The Predictive Index carried out a survey in August that asked 1,038 employees from 13 industries about their managers. The workers were tasked with rating 14 statements related to psychological safety on a scale of 1 (strongly disagree) to 5 (strongly agree).

Professor Amy Edmondson of Harvard Business School described psychological safety as "a belief that one will not be punished or humiliated for speaking up with ideas, questions, concerns, or mistakes".

The data suggests that good managers create more psychologically safe work environments. It also shows the subtle ways that managers can sabotage their teams and destroy psychological safety (for example, not valuing employees' unique skills, not being approachable, and not respecting personal values). While these aren't outright displays of mistreatment, they still have a negative impact on the employee experience.

Employees who feel psychologically safe are less likely to look for work elsewhere. Despite the claims that certain industries - such as recruitment and marketing - have better managers, the data indicates that there are no statistically significant differences between average manager ratings across industries.

Organisations that leverage talent optimisation succeed in reaching their business goals largely because their employees work together efficiently, states the study.

The report can be found here.