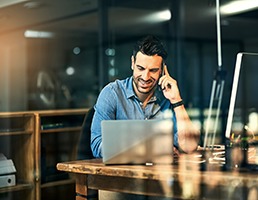 Digital tools such as email, instant messages and social media are interrupting workers' productivity, according to a report called State of Work by software company Workfront.

For this year's study, Workfront surveyed 3,750 knowledge workers during July across the UK, the US, the Netherlands, and Germany.

The findings reflect a workforce that is "ready to move forward, eager to engage in high-impact, strategic efforts, and yet at the same time struggling and frustrated in their efforts to get work done".

Respondents are all employed by a company with at least 500 employees, work on a computer, and collaborate with other people on projects.

Based on the 3,750 worldwide survey participants, workers are interrupted an average of 13.9 times every day. Scientific study indicates that it can take more than 20 minutes after an interruption to return to the original task.

The very tools being used to enable communication and collaboration may actually interfere with productivity, suggests the analysis.

The research also found that people who work in a state of constant interruption reported higher levels of stress and actually adapt their behaviour to the interruptive environment.

It also indicates that 89 per cent of respondents believe their role matters, and 78 per cent said their job represents more than a pay cheque.

When asked to choose the word that most represents the job they do, 'accountable' was cited as number one.