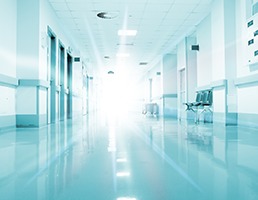 NHS estates teams need to "put an end to pushing repairs down the road", according to a senior NHS estates official speaking at the Healthcare Estates conference in Manchester this week.

Simon Corben, director and head of profession, NHS Estates and Facilities, NHS England & NHS Improvement, told delegates that the NHS's Long Term Plan, published earlier this year, acknowledged that much of the NHS estate is beyond its shelf life and this was "a positive realisation".

He said: "We are now actively tracking the disruption to clinical services caused through infrastructure failure, [such as] the potential failure of a 45-year-old cable [that] could and will mean millions saved in the event of failure. These costs become secondary when you then consider the impact that this has on patients, friends and family to the disruption to their care."

He said the new approach and language is clearly getting "significant traction" as the government had announced an extra £1 billion of capital funding this year and there was potential for more to come.

Corben added that "tracking failures in infrastructure is difficult" partly because they are fixed so quickly but he said that the "accumulated effect that these disruptions are having on staff and the service is significant" and he stressed the need to continue to track them so the case for more funding could keep being made.

The conference continues today and tomorrow.