Britons struggling to keep up with 'always on' work pressure 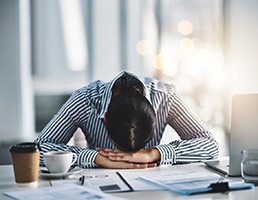 British employees are adopting unhealthy ways of working that are having a profound effect on their personal lives, suggests research by Microsoft UK.

Asking for the views of more than 2,000 workers, the study found that 30 per cent of Brits regularly sacrifice their personal lives for work, 56 per cent have answered work-related calls out of office and eight in 10 (80 per cent) have struggled to focus at home because of pressure from work.

These unhealthy modes of working are going unnoticed by many British employees - only 29 per cent of whom admit their workplace has an 'always on' culture - but are leaving people struggling to keep their heads above water.

In the poll, 86 per cent of the workers said they have felt anxious owing to work pressures in the past year - while 87 per cent have trouble switching off or sleeping (86 per cent), as well as feelings of failure (79 per cent).

Meanwhile, a third (33 per cent) do not have enough time to spend with their family and 41 per cent struggle to make time for health appointments - all because of workload.

The poll made it clear that British employees believe flexible working can help to improve work/life balance, allow them to spend more time with family and take care of life admin. However, few said they feel in a position to take advantage of flexible working policies today.

Of the 50 per cent of UK workers whose organisations offer flexible working, just 35 per cent are actively encouraged to do so and more than a third (35 per cent) said they need an "official reason" such as an appointment to work outside the office.

Meanwhile, for those that do make it out of the office to work more flexibly, outdated tech is slowing people down and preventing employees from doing their best work. Just 18 per cent of Brits have not faced tech difficulties when working remotely and almost half (48 per cent) of British employees wish their organisation invested in better tech so that they could work more efficiently.

The findings also show a lack of support systems available for employees in Britain today. Only 23 per cent of organisations regularly implement initiatives to improve employee wellbeing and 53 per cent said they disagree that their organisation offers training to help employees embrace a healthy, balanced lifestyle.