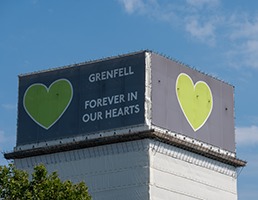 NHS estates teams must learn and enact vital lessons about fire safety from the Grenfell Tower fire, delegates at the Healthcare Estates conference in Manchester were told.

He said: "NHS trusts have big issues with compartmentation. It's usually [an issue that is] hidden away and not seen on a daily basis."

Compartmentation means having specific areas called 'fire boxes' that make an area resistant to fire and smoke. At Grenfell it was the basis for the widely criticised 'stay put' policy, which meant people did not escape by leaving their flats but stayed in their homes expecting the spread of the fire to be contained.

Ware said: "Hospitals and healthcare establishments are quite unique in that we have lots of people occupying the building that are not able to get out on their own. So they need protecting and if they need to evacuate, they need assistance from staff. We need to try our best to make sure they don't have to evacuate, that is the key to compartmentation - containing a fire in a small area so it does not spread elsewhere."

He added: "Compartmentation is key to the 'stay put' policy in a high-rise tower block; it is also key to fire safety in a hospital because we need to protect people who can't self-evacuate."

Ware said the other significant lessons that NHS estates teams can learn from the tragedy was to make "fire safety a priority".

He said: "That is starting to happen. Perhaps in high-rise buildings that was not as prevalent as it could have been and in healthcare that was not as prevalent as it should have been for a number of years. Now that is starting to come to the top and that is a result of Grenfell. It is important that there is buy-in all the way up to board level; it must be taken seriously and appropriate resources must be put in to make sure they deal with fire safety issues in a hospital."