'Working from home' can impair your mental health 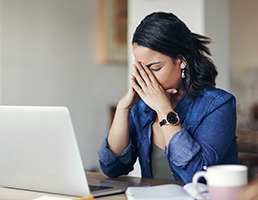 Working from home leads to loneliness and anxiety, suggests a survey by serviced workspace company Offices.co.uk.

Half of the 2,400 home workers polled by the company admitted that they missed the office routine when working from home.

One in six people deals with a mental health problem such as anxiety or depression at any time. Those with flexible job roles, such as home workers, seem to suffer more than the average worker - nearly a third reported feeling stress from working from home, according to the survey.

Jonathan Ratcliffe of Offices.co.uk said: "We all think we want flexible working, but what if it's actually routine that's good for us as human beings?"

The survey found that 28 per cent suffered from loneliness and anxiety caused by separation from colleagues. Another 69 per cent felt they missed out on opportunities when working from home, and 54 per cent missed the routine. The survey indicates that 83 per cent get stressed trying to cope with juggling home and work life and 73 per cent said they want a mix of routine with home working.

Nearly a third of those surveyed cited loneliness and anxiety, and seven out of 10 said they feel they have missed out on opportunities.

The survey states that 83 per cent told how they felt obliged to carry out house chores and that they often get given jobs to do while "working from home".

Ratcliffe added: "Social interaction helps fight the feeling of loneliness and anxiety. At the end of the day you must work out what's right for you, and make it happen."

 Separately, the percentage of UK workers experiencing work-related stress has almost doubled in the past 20 years, according to an analysis of working trends by the Association of Professional Staffing Companies (APSCo).

In 1999, results from a preliminary study conducted by the Health and Safety Executive (HSE) revealed that one in five (20 per cent) workers said they are "very" or "extremely" stressed at work.

Two decades later, a report by Business in the Community (BITC) and Marsh Benefits revealed that this figure has almost doubled, with 39 per cent of UK workers suffering symptoms of poor mental health because of their job in the past year.

A separate study conducted by ICM in 1999 showed that 26 per cent of employees said they had fallen ill as a result of workplace stress. According to the HSE, at least 11 million days are lost at work a year because of employment-related stress.

Ann Swain, global CEO at APSCo, said: "As we try to create more awareness for mental health and the wellbeing of individuals, businesses must acknowledge how they impact their employees and can affect their health. Although we now have assistance from technology and AI to make our jobs easier and more meaningful, it has also created an "always connected" environment that may make it difficult for some workers to switch off, causing high levels of stress. Employers should openly discuss this with their workforce and encourage healthy working habits, allowing for flexibility where possible."