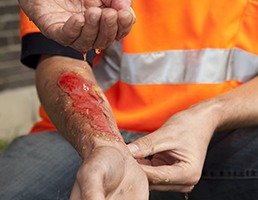 At least half a million (595,000) people reported sustaining burn and scald injuries at work between 2015 and 2018, according to the latest data.

The most prevalent types of injury that are self-reported incidents and number in their thousands include strains and sprains, superficial lacerations and open wounds, fractured and broken bones, burns and scalds, and dislocation of joints.

In the run-up to National Burns Awareness Day 2019 on 16 October, health and safety training company CE Safety conducted an analysis of the Office for National Statistics' Labour Force Survey from the past four years (2015 to 2018). It found that 23,000 workers reported suffering non-fatal burns or scalds.

This means that an average of 75 workers out of every 100,000 suffered a burn or scald at work.

According to the World Health Organization, the most common types of burn injuries at work occur as a result of accidental misuse or mishandling of thermal, chemical or electrical sources, or because of fire.

The Health & Safety Executive states that many serious accidents at work resulting in burns can be avoided by using due diligence. Employers can be fined heavily if such injuries result from unsafe work practices, including employees not having the correct protective clothing or equipment.