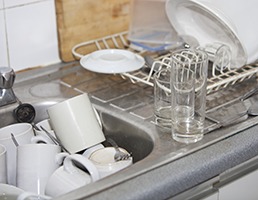 Challenger bank Vanquis has conducted a nationwide office survey to find out what makes UK workers tick - and what ticks them off.

The results found that 23.1 per cent of respondents said they would take or consider a promotion without a pay rise to increase their authority over colleagues, while 9.1 per cent said they would do so to impress a date or a loved one.

Around 10 per cent of Brits owned up to sabotaging a rival colleague's career for personal gain, while 9.6 per cent offered money to a colleague in exchange for a promotion. The study found that 8.3 per cent of UK workers admitted blackmailing their bosses for a more senior position.

Vanquis asked UK workers what kind of behaviour in the office irritated them the most. The results showed that poor food hygiene and cleanliness ranked highest among office grievances, with 85.4 per cent of UK workers objecting to rotting food in fridges. Another 83.2 per cent took issue with messy kitchens and bathrooms, which came in higher than discriminatory, rude, and offensive language complaints (81.75 per cent).

The bank also asked UK workers what actions they have recently - or historically - taken to mitigate inappropriate, inconsiderate, and/or offensive co-worker behaviours.

Verbal confrontation ranked highest - 40.7 per cent of Brits said they had called out a co-worker's behaviour to their face.

Those working in the energy sector were most likely to complain to their boss about a co-worker (44 per cent admitted that they had done so).

Finally, Vanquis asked about the most hated buzzwords in the workplace. The top two were: "Are we on the same page" and "Let's hit the ground running ASAP".

The full survey results can be read here.