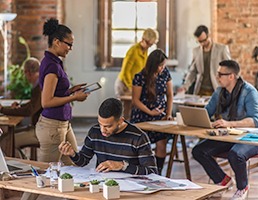 Joint research by Gensler and the British Council of Offices (BCO) on the rise of flexible workspace in the UK's corporate sector has found that 40 per cent of flexible space users would rather work from a conventional office.

Other findings in the study show that satisfaction rates for spatial and service features were 12 per cent lower for London compared with other UK regional cities.

Only 29 per cent of the respondents said they agree or strongly agree that the flexible workplace had increased their efficiency for tasks where they needed to concentrate, while 38 per cent disagree.

The research also shows that 69 per cent said they agree or strongly agree that their workplace helps them to collaborate more and 57 per cent of flexible workspace users reported being happier at work.

The researchers state: "While the future of co-working is increasingly being explored as part of academic and industry research, there has been limited focus on what it means for large corporate occupiers."

Co-working has evolved from being the realm of freelancers and start-ups to being part of the corporate arena. Gensler Research Institute's US Workplace Survey 2019, showed that 14 per cent of respondents working for companies of 100 or more employees reported using co-working space for part of their average working week.

Research was based on responses from 540 corporate users of flexible space from financial services (38 per cent), real estate (36 per cent) and consulting services (21 per cent), among others. Companies interviewed include British Land, GSK, RBS, WeWork, Microsoft, Vodafone, HSBC and Verizon.