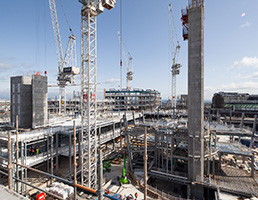 The 33-year partnership will develop and operate a new low-carbon energy scheme at Edinburgh St James that will:

By using a low-carbon and cost-effective energy solution through the on-site combined cooling, heat and power (CCHP) energy centre, Engie will meet all residents and occupiers' energy needs on their doorstep.

CCHP typically has an energy efficiency of over 80 per cent compared with 56 per cent for a more conventional system. In addition, allowance has been made for expansion of the service into even more sustainable technologies as they are developed.

The new energy centre is a part of the growth accelerator model (GAM) agreement between Edinburgh St James, the Scottish Government and the City of Edinburgh Council. The funding from this partnership is helping to regenerate the capital's East End.

Under the terms of the partnership, Engie will design and fit out a basement energy centre, adopt the district heating and cooling network from Edinburgh St James and provide continuing operation and maintenance, including lifecycle responsibility for the scheme.

Andrew Hart, managing director for Engie's urban energy business, said: "This hugely significant project will be transformational for the city of Edinburgh. We have been involved in conversations surrounding the future of the scheme for several years so it's fantastic to have agreed our part in bringing it to fruition.

"Too often, energy is an after-thought when it can bring remarkable benefits to a scheme of this size. The fantastic thing about Edinburgh St James is that they saw, very early on, how important a factor this would play in the successful delivery of the scheme. It will also play a role in supporting the City of Edinburgh's target of net zero-carbon by 2030."

Engie expects to complete the centre in late 2019. The retail element of Edinburgh St James is set to open in October 2020.