Half of UK employees feel lonely at work 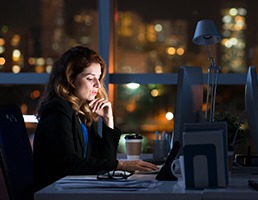 More than half (53.6 per cent) of Britons admit suffering from loneliness in the workplace, according to research by CV Library.

The main reason for respondents' isolation is that they feel they have little in common with their colleagues (44.4 per cent). Following this, 26.5 per cent said it was because they didn't have good work friends, and 21.7 per cent cited the fact that their colleagues are a lot younger.

Other reasons why workers feel isolated include: working in an office on their own (20.6 per cent); having to eat lunch alone (18.2 per cent); working with older colleagues (11.1 per cent); and not being invited to work socials (6.4 per cent).

The study also found that one in four (27.2 per cent) of senior leaders felt lonely at work, and another 40.8 per cent claimed that people's attitudes towards them changed after they moved into the role.

Shockingly, more than half of the respondents (56.8 per cent) claimed that their home life has suffered as a result of work, and 54.7 per cent commented that it is not worth it to be where they are now professionally.

Alongside this, a quarter (24.1 per cent) of women admitted that they had lost friends after being promoted, compared with only 10.3 per cent of men. Yet, both men (36.8 per cent) and women (36.1 per cent) felt people's attitudes towards them changed after securing a promotion, regardless of whether they lost friends or not.