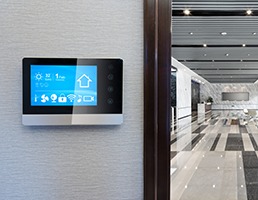 Investment in smart building technologies is now a priority for commercial real estate operators, according to a study by management consultancy CIL.

Its research among landlords, property managers, agents and suppliers in Europe and North America by CIL forecasts a 10 per cent growth in smart technologies as a result.

It concludes that there is increasing recognition of the ability to create efficiencies in commercial real estate, bringing costs down, increasing tenant satisfaction, improving space management and ensuring strong energy performance.

More than half (58 per cent) of respondents to a survey said that smart controls and sensors were important in building management, with the majority (92 per cent) increasing spend on this.

CIL forecasts a 10 per cent growth rate over the next five years, and profit margins of over 20 per cent for suppliers developing systems and technologies such as controls, occupancy monitoring and data-led services for the sector.

It adds that the current industry focus on LED lighting was broadening to include advanced heating, ventilation and air conditioning systems, with 84 per cent of respondents predicting a rise in future spending.

James de La Salle of CIL said that properties in larger cities with higher rents were seeing early investment because it was easier to justify upgrades, with older real estate out of larger cities taking longer to adopt the technology.

"However, as property managers build a stronger economic case for smart technologies, we predict a sector of high growth and strong margins, with clear benefits for commercial real estate," he said.