FPA calls for total ban on combustible cladding on buildings 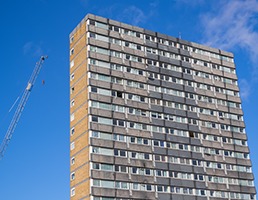 The Fire Protection Association (FPA) has called for the government combustibility ban for buildings to be based upon risk - not just height.

The recent ban on combustible building materials by the government was for buildings over 18 metres - or six storeys high, said the national fire safety organisation.

The Cube student block in Bolton (providing student accommodation in a six-storey block), which caught fire on 15 November, provides a stark reminder that the UK's fire safety problem is the result of many issues and not just Grenfell-style ACM cladding.

Although the final details of the Cube fire have not yet been released, several key issues have emerged, all of which are relevant to discussions on the current review of building regulations, said the FPA.

The Cube was a modern building, designed and built using all of the latest rules, guides and expertise available. Yet, as two people were injured, the FPA said it should be classed as 'a near-miss event'. The high-pressure laminate and timber-cladding components clearly played a large part in the fire's progress, possibly in combination with the insulation and cavity membranes.

Fire alarms are reported as being almost a daily event, added the association, so it is understandable that students did not assume that night to have been any different. Despite this, it said high-integrity alarm systems exist that are tested for immunity for common 'false challenges'. Despite countless calls for change over many years, they remain unlegislated for.

The FPA is calling for:

Jonathan O'Neill, managing director of the FPA, said: "The fires at the Bolton student block, Worcester Park in London and the Beechmere care village in Cheshire, prove we cannot be housing people in buildings made from combustible materials. This issue needs to be addressed urgently; it simply cannot wait. We urge this issue to be a priority for the new government."