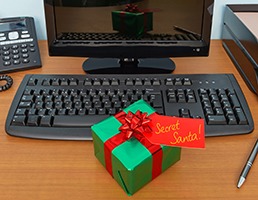 The financial strain of contributing to activities such as Secret Santa and presents for birthdays and promotions has led 26 per cent of young workers to dip into their savings and/or overdrafts to contribute, suggests UK job board Jobsite.

Jobsite's study revealed that almost three-quarters (73 per cent) of workers aged between 23 and 38 have contributed more than they could afford to an office celebration.

The average millennial's whip-round is 34 per cent more expensive, with their average contribution reaching £9 (and a total of £151 a year, compared with £7/£99 a year for all workers).

Just under a quarter of these employees said they feel angry with the people organising the whip-rounds for not considering their financial situation - some have even being 'called out' on the amount they have contributed.

Seventeen per cent said they have also experienced allegations of stinginess relating to their contribution - resulting in a sense of shame within the workplace.

Because of this, one in five (20 per cent) of workers believe that such events should not be celebrated at all in the workplace, and 35 per cent of millennial would even like to see them banned (25 per cent of all workers).

But despite the financial and emotional pressures - the likes of Secret Santa are here to stay, as most (61 per cent) of UK office workers cited them as good for morale; 60 per cent believe they help build a healthy rapport among colleagues and another 64 per cent asserted that gifting between employees is a sign of respect and appreciation.

Alexandra Sydney, marketing director at Jobsite, said: "If a set company budget for celebrations isn't an option, the best way to approach whip-rounds is to highlight that it's a worker's personal choice as to how much they contribute, or whether they contribute at all.

"When it comes to Secret Santa, again this should be 'opt-in' rather than a requirement, and a budget range can be agreed from the offset to avoid any awkwardness. The main thing to bear in mind is that bringing teams together for celebrations should act as a boost to team morale, not be something that individuals avoid as a result of feeling pressured to contribute a particular amount."