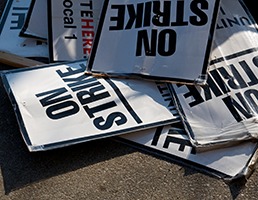 Fears over automation are among factors predicted to contribute to a rise in workforce activism over the next five years, according to research.

A report published by Herbert Smith Freehills, says that senior executives believe workforce activism is one of the top three risks to their organisation's reputation.

The report, The Future of Work, is based on interviews with companies with annual sales of more than £250 million. It suggests that large corporations expect an annual hit to revenue of up to 25% as a result of workforce activism.

The study found that more than 80% of companies expect to see a rise in workforce activism over the next three to five years.

Fears around automation replacing human workers was expected to be a key trigger for activism by 57% of those surveyed, topping pay and benefits (47%) and environmental concerns (46%).

Agency and contract workers are increasingly confident about sharing their views, the report also said.

More than half (55%) name workforce issues as a significant risk to corporate reputation. Only fear of cyber threats (65%) and a new global economic slowdown (62%) are higher.

"Our research suggests that they are willing to voice opinions internally and externally about topics ranging from strategic corporate decisions to ethical business conduct," she said. "Employers must balance the potential damage to reputation this creates with the reality of creating value for shareholders."

The research indicates that almost 80% of respondents have works councils or some form of board representation for employees. However, 94% expect an increase in the use of public social media channels and 77% say crowd funded legal challenges will rise.

Almost two-thirds (63%) suggest the use of digital petitions will increase over the next five years.