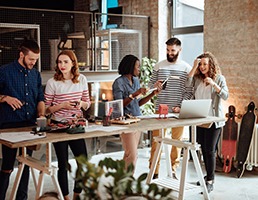 Freedom to work independently, flexibility and avoiding dated workplaces are key when Generation Z workers and potential workers are looking for an employer, shows a poll by Kronos Incorporated.

The workforce services company's global survey found that dated workplaces are 'red flags' for Gen Z (born between 1995 and 2015) when looking for an employer. And while one in five of this cohort said they want a consistent and predictable schedule, 23 per cent expect employers to offer flexibility, says the study.

It surveyed 3,400 Gen Z workers across the UK, Australia, Belgium, Canada, China, France, Germany, India, Mexico, the Netherlands, New Zealand, and the US.

Although it found that pay was still the most important factor when choosing an employer, flexibility was non-negotiable, says Kronos. Of those questioned, 39 per cent said they wanted the freedom to work independently.

Nearly half of respondents (48 per cent) said that stress at work would directly affect their performance.

The study also reveals that employee perks such as free snacks, happy hours, and gym reimbursements were enticing, but that traditional benefits like healthcare coverage, retirement plan and life insurance were preferred by a 2-1 ratio by Gen Z.

Forming connections at work inspires Gen Z with the ability to create strong relationships with colleagues was cited as a motivation by 36 per cent.

Joyce Maroney, executive director, The Workforce Institute at Kronos, said: "Gen Z is just starting out professionally and feel they have much to gain from testing the waters at multiple companies and different industries. Yet, while few today will employ a single worker from hire to retire, organisations can certainly engage Gen Z from hire to rehire. By creating a working culture where employees feel supported, inspired, and equally empowered to enjoy life in and outside of work, employers can encourage their best people to 'boomerang' back or otherwise create brand ambassadors for the future."