Younger workers do not 'spill' health issues to bosses 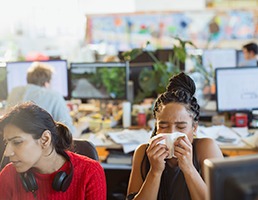 More than 40 per cent of UK workers have a hidden health issue they've never disclosed to their employers - and younger employees are the most likely to withhold information from their bosses.

A survey of 1,000 employees carried out by healthcare provider Benenden Health shows that nearly 42 per cent of respondents have a health issue they have never divulged to an employer.

Additionally, nearly a quarter (22 per cent) of respondents said they had lied to their employer about taking time off for an appointment and nearly 40 per cent of employees don't even feel comfortable talking to their employers about their personal health.

Benenden Health, which also surveyed 1,000 SMEs on their health and wellbeing offering for employees, is calling on business owners to open communication channels with their staff and consider the health needs of their workforce to support a healthy team, increase retention and reduce unexpected absences.

The provider's research shows that SMEs would sooner recruit a 55-year-old than a 24-year-old with the same CV, so younger workers are already at risk of being overlooked for roles even without the extra worry about their health impinging on their employability.

The data also highlighted the importance of benefit packages in attracting new recruits to a business. When questioned, half of all respondents (50 per cent) said a strong health and wellbeing programme would increase their likelihood to join or stay with a business, and nearly a third (29 per cent) said they would be willing to take a less well-paid job if it also offered a strong health and wellbeing package.

Yet, despite this, 85 per cent of SMEs don't offer a healthcare package to employees above statutory allowances; 43 per cent of these companies said they did not consider a health and wellbeing package valuable in recruiting staff.