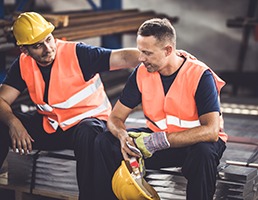 More than four million working-class men are suffering in silence with their mental health, new research has revealed.

The report, published by consultancy Public First and commissioned by online gambling operator Kindred Group, surveyed 4,000 UK adults. It revealed that 4.34 million (28 per cent) working-class men have suffered the symptoms of a mental health issue that they thought might require treatment in the last 12 months but decided not to seek medical help.

There was also lower awareness of the symptoms of mental distress among working-class men: 54 per cent were aware of the symptoms, compared with 66 per cent of the rest of UK adults.

Mental ill health is estimated to cost the UK economy between £70 billion and £100 billion a year.

The survey revealed that:

The report also revealed that a decrease in depression rates of 2 per cent could:

The study found that working-class men are more likely to follow sports than other social groups, and football in particular. They are also more likely to consider sport to be an important part of their lives and the local community and this could be used as a way to solve their mental health problems.

Three in five (61 per cent) working-class men identify as fans of specific sports teams, compared with 49 per cent of everyone else.

The survey stated that 40 per cent of working-class men are football fans of a specific team and consider their team to be important in their lives, compared with just 29 per cent of everyone else.

The report stated that men could benefit from their "passion and interest" in sport through schemes such as Derby County Community Trust's Team Talk initiative, which helps men use the football brand to engage with each other in a way that traditional mental health services do not allow.