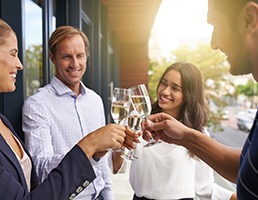 British office workers spend, on average, about £1,715 a year on nights out, coffees, birthdays and charity, according to research by Nationwide Building Society.

Nationwide polled more than 2,000 office workers across the UK and found that 15 per cent said they didn't like to pay out on charity requests and another two in five (40 per cent) were indifferent to such requests.

More than half of the nation's office workers said they were happy to put money in for a colleague's leaving card or present (54 per cent). However, more than a quarter said they felt pressured when it came to contributing towards birthday cards and leaving presents (both 26 per cent).

Across a working lifetime of four decades, this would equate to £68,601 - more than two years' take-home pay based on the UK average salary of £30,420, according to the Office for National Statistics.

Nearly a third (32 per cent) of office workers have borrowed money from colleagues, with men (38 per cent) more likely to do so than women (28 per cent).

However, not all borrowed money is returned, as more than one in 10 (11 per cent) admit failing to pay the money back and this is far more likely to happen with those aged 16 to 24 (18 per cent). That age group is also the most likely to borrow money in the first place (47 per cent), followed by those aged 25 to 34 (39 per cent).

Guy Simmonds, head of current account customer management at Nationwide, said: "As our research shows, it's ironic that work can be so expensive given we get paid to do it. However, on the basis we spend so much time in and out of the office with colleagues, it is perhaps unsurprising that we pay out so much on and with each other, especially those in big teams.

"Yet, enjoying the camaraderie of working in a team can put pressure on the purse strings throughout the year, which is why it is important not to feel pressured and only put in what you can afford. We would recommend putting some money aside each pay day to ensure you have enough for yourself before you have to deal with the myriad of birthdays, charity requests, coffee rounds and nights out."