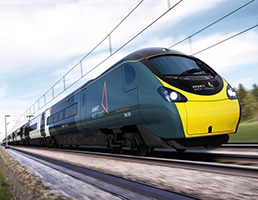 All 56 electric Pendolino trains deployed on the West Coast Mainline will be overhauled in a £642 million, seven-year deal signed between the route's new operator, Avanti West Coast, and Alstom, which built the fleet.

As well as covering a £127 million upgrade of the trains, the deal will see Alstom maintaining them until 2026 alongside a new train fleet recently ordered from Hitachi.

The first of the then 'revolutionary' tilting Pendolino trains entered service on the London to Glasgow route in January 2003.

The overhaul will focus on onboard facilities, with passengers benefiting from more comfortable seating, improvements to the shop, revamped toilets, better lighting, new interiors, and the installation of at-seat chargers and improved Wi-Fi throughout. Performance will also be improved through new maintenance programmes.

The deal will create 100 highly skilled roles, mostly based at Alstom's Transport and Technology Centre in Widnes, and hundreds more existing engineering jobs will be secured at key depots in Glasgow, Liverpool, Manchester, Oxley and Wembley.