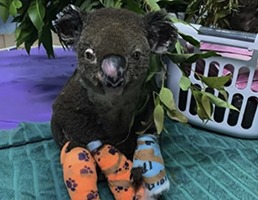 British facilities management organisations have teamed up to raise funds in aid of rescue measures for people caught up in the bushfires raging through Australia.

The Institute of Workplace and Facilities Management (IWFM), the UK chapter of the International Facility Management Association (IFMA), the Royal Institution of Chartered Surveyors (RICS) and volunteer groups including LGBT+ in FM and Emerging Workplace Leaders (EWL) have joined together to fundraise for the current bushfire emergency devastating Australia.

At this time the most efficient way to help is through monetary donations, which can be distributed further down the line. These donations will go towards rescuing wildlife and supporting the volunteer firefighters and civilians who have lost everything.

Currently, the catastrophic conditions on Australia's east coast mean that thousands of people are still being evacuated. Until such time as the fires are brought under control or stopped completely, material donations and offers such as food, clothing and housing are more difficult to allocate.

By collectively donating, UK FM whose Australian counterparts will be an integral part of the response to the devastating effects of the fires, can show the power the industry can have in supporting this country and its people to get back on track as soon as possible.

 This season, 26 people have been killed in the bushfires so far. This includes three volunteer firefighters in New South Wales (NSW) who have died while battling the fires.

 An estimated 480 million animals have been killed since bushfires in NSW started in September 2019. This figure comes from Professor Chris Dickman, an expert on Australian biodiversity at the University of Sydney.

 Over seven million hectares of land have burned in the fires. According to the  New York Times, that area is six times the size of the 2019 Amazon fires.

 Almost 2,000 homes have been destroyed across the country in the fires.

  NSW Premier Gladys Berejiklian confirmed on Sunday that the speed of these bushfires is "unprecedented" and that the state is facing "uncharted territory".