Apleona sails into four-year deal with Port of London Authority 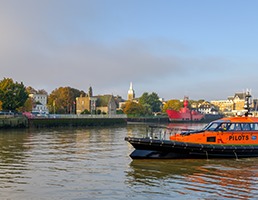 Apleona HSG Facility Management UK has been awarded a new contract to deliver services on behalf of the body responsible for promoting and protecting the tidal River Thames.

Under the four-year deal agreed with the Port of London Authority (PLA), Apleona will deliver cleaning, janitorial services, security, waste, pest control and washroom hygiene at seven sites including Richmond in Surrey and Gravesend in Kent.

A large portion of the River Thames is tidal, and so subject to strong currents. Of the Thames' 346 km total length, 160km is tidal. This section, known as the Tideway, stretches all the way from the sea until stopping at the first lock on the river in Teddington. The Tideway includes the Thames Estuary, Thames Gateway and the Pool of London.

The PLA oversees commercial and leisure activities on the river between Teddington and the North Sea. It was created in 1909 to bring order to the chaos and congestion on the Thames that developed after industrialisation in the late 1800s. The bill that led to the creation of the PLA was introduced by David Lloyd George and was guided through parliament by Winston Churchill, and the organisation came into being on 31st March 1909.