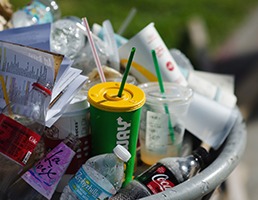 An edie survey of almost 300 sustainability and resource professionals has found that over 50 per cent of businesses haven't examined the carbon impact of single-use plastics alternatives.

This discovery comes amid growing calls for businesses to intertwine actions on plastics and climate change.

Of the 287 respondents, almost 59 per cent of respondents said that their organisation hadn't set a public target on plastics yet, despite many businesses noting that public targets can send a strong message to suppliers and markets.

In comparison, 34 per cent said their organisation did have a public target on single-use plastics in place.

Just under half (49 per cent) said their organisation had not examined the carbon impact of single-use plastic alternatives compared with 39 per cent that have.

By 2050, the plastics industry is likely to account for 15 per cent of global greenhouse gas emissions, and if plastics production continues at its current pace by 2030 the emissions associated with it would reach 1.34 gigatonnes annually -equivalent to the emissions released by more than 295 new 500-megawatt coal-fired power plants.

A report from the Green Alliance has shown that companies are under "considerable and justified pressure" to move away from single-use plastics, often at the expense of carbon impacts and recyclability of alternative materials.

The report notes that interviewees felt that not all changes to remove or replace single-use plastics had been considered through the lens of additional environmental impacts and increased carbon footprints. One supermarket representative said: "We are aware that [by switching from plastic to other materials] we may, in some cases, be increasing our carbon footprint."