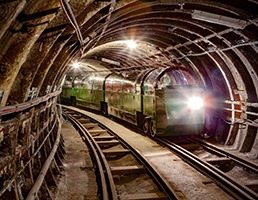 Pareto FM has been awarded a hard FM services contract at the Postal Museum in Clerkenwell, London.

The museum, near the Mount Pleasant sorting office, is run by the Postal Heritage Trust and displays five centuries of British social and communications history.

It has permanent exhibition galleries and a temporary exhibition space, including the Mail Rail - London's secret Post Office underground railway. It was opened to the public in 2017 for the first time in its 100-year history and forms part of a subterranean ride through some of the original tunnels.

Tish Jayanetti, head of operations and commercial at the museum, said: "We were looking for a provider that could adapt to fit the specific needs of our organisation. We felt that Pareto FM was uniquely positioned against others in the market to deliver a bespoke service tailored to our way of working. We were impressed with their ability to truly embrace our culture, values and design a service provision to suit."

The Queen opened the National Postal Museum at its previous home, the King Edward Building near St Paul's Cathedral in 1969. It was built partly to house an award-winning collection of British Victorian stamps donated to the nation by noted philatelist Reginald Phillips in 1965.