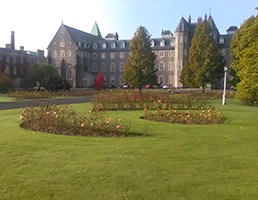 The deal will see Mount Charles provide food and beverage services to the university's 14,000 students, staff and visitors, a number expected to grow over the duration of the contract.

Maynooth University is one of four constituent universities of the National University of Ireland and in 2019 was placed 50th in the Times Higher Education World University Rankings of the global top 100 universities under 50 years old.

Mount Charles will run all the Maynooth University food service operations on the campus including restaurants and cafes. The main student restaurant Phoenix has received a complete branding overhaul to become Urban Square Food Co and Urban Square Coffee Co, replete with graffiti artwork, and pool and foosball tables.

New brand 'POP' has been introduced to the Arts Building, offering sweet treats such as milkshakes, bubble waffles, and ice cream. Improvements have been made to the Starbucks cafe, situated in the John Paul II Library, and Mount Charles' own Mexican street food brand, Coco Diablo, has been installed in the John Hume Building.