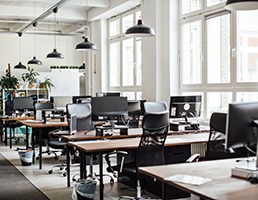 Flexible office space enquiries from start-up businesses doubled from 8 per cent in 2018 to 15 per cent in 2019, according to Workthere's latest market snapshot.

Workthere found that the proportion of companies dissatisfied with their current premises in London doubled year-on-year from 4 per cent to 8 per cent. The company said its new business enquiries in the capital rose from 7 per cent in 2018 to 12 per cent in 2019.

London also reported the largest average enquiry for the number of desks required at 15 desks, followed by Reading at 9.8 desks and Manchester at 7.9 desks.

Manchester's monthly price per private office desk increased by 8 per cent from £346 in 2018 to £372 in 2019. In contrast, London saw a decrease of 5 per cent from £662 to £627, predominantly driven by an increase in providers taking space and greater competition in the market.

Cal Lee, global head of Workthere, said: "Our findings show that across the UK, enquiries from start-ups remain a key driver of wider demand for flexible office space alongside growing corporate demand. The diversity of interest remains one of the biggest strengths of the sector, with all types of businesses, big and small, from tech to legal, embracing the use of flexible office space within their real estate portfolio."

Jessica Alderson, global research analyst at Workthere, said: "We have observed over the last year that occupiers are becoming increasingly demanding when it comes to what they expect from their offices; value for money has become paramount in a sector which sees a high number of new entrants into the market.

"Compared to 10 years ago, companies now have such a variety of different providers to choose from and, as a result, can afford to move on or be more picky when it comes to finding their perfect office. The competition in the UK markets goes from strength to strength as new providers, including landlords, enter the market whilst existing providers up their game."

London (Greater)
Up to £47,276 per annum plus excellent benefits
Reference
59097
END_OF_DOCUMENT_TOKEN_TO_BE_REPLACED