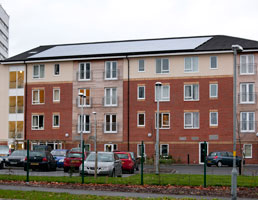 Willmott Dixon says it is not giving up on photovoltaic (PV) installation and has just completed a £100,000 project in Birmingham.


The company has spent nearly £100,000 installing 150 square metres (more than 1,600 square feet) of PV to provide affordable energy at an extra-care scheme for Housing 21 at Saxon Court.

"It will cut energy costs at the 87-apartment facility by £1,000 per annum for residents and Housing 21 - important in a sector that's a heavy user of energy," says a statement from the privately-owned construction, regeneration and support services company.

Housing 21 was started in 1964 by the Royal British Legion and works with older people of all backgrounds, not just military service. It provides care services and manages more than 18,000 sheltered extra-care apartments and bungalows in 470 projects.

This month, the feed-in-tariff (FiT) for electricity from PV panels going into the national grid halved, from 43p/kWh to 21p/kWh.

The move by the government sent a chill throughout the installation market where many installers will maintain panels, sometimes at their own expense, and pick up the feed-in-tariff.

Willmott Dixon said the income generated at Housing 21's Saxon Court will enable it to repay its investment in 10 years. "At the end of 10 years, the £6,000 FiT income per annum will go straight to the care home for the following 15 years at current rates," the statement noted.

Although FiT income from future PV installations will be lower following the government's reduced the FIT rate,  Willmott Dixon said it will be installing more PV panels at another Housing 21 scheme in Warwickshire in 2012 "to show its commitment to PVs as a source of low-cost energy for the most vulnerable in society".

John Frankiewicz, divisional chief executive at Willmott Dixon Capital Works, said there was "disappointment" about the reduced FIT as the technology is becoming cheaper to install and remains an excellent way to provide low cost energy from a renewable source.

"The savings in the cost of energy are still substantial," said Frankiewicz. "While the payback times are longer and investment returns smaller, we will look at how to adjust our business model so that we can continue using PV for sectors like elderly care."

Willmott Dixon's assessment of the PV marketplace came as Carillion's Energy Services division announced in late November that it is seeking upwards of 1,500 redundancies because of the lower FiT.

The Gateshead-based company, formed when Carillion Group bought Eaga for around £306 million in February, began a 90-day consultation period with its 4,500 staff.

Social housing and construction business Mears Group also said it was bailing out of photovoltaic installation because of the government's decision to halve the FiT.

Installers are afraid lower cash-back will reduce demand for the panel by residential buyers. For small and large commercial contracts, the cut drives a hole through the business proposition whereby the installer also manages panel arrays and receives part of the feed-in tariff as payment.