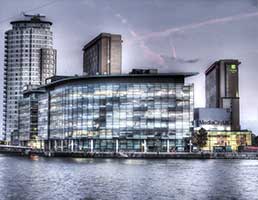 Interserve has won a five-year facilities management contract with the BBC, worth more than £150 million.


The support service and construction company told FM World that using new technology to maximise space utilisation and training and development would be key priorities.

The deal includes the management and delivery of services at over 150 facilities across the UK, among them Broadcasting House in London, MediaCityUK in Salford and Pacific Quay in Glasgow.

The portfolio covers a floorspace of 590,000 square metres.

Interserve will provide 26 services, from critical broadcast engineering to implementing a new, flexible workplace support model. Around 1,100 employees will transfer to Interserve from existing providers.

Interserve also said it would "deploy new technologies" to help the Corporation make informed decisions on its estate.

"What's absolutely key to the BBC is that it demonstrates value for money to the licence payer," Carter said. "Because we'll be looking to roll out our workplace support assistance model, we'll be using that software to track how space is used in order to drive up utilisation."

Interserve already used MiCad on its healthcare contracts where it tracks turnaround of hospital beds and use of operating theatres.

Carter also told FM World that Interserve would be focusing on the people issues involved with the changes the company would be implementing.

"We put a lot of emphasis on training and developing staff," Carter said. "We have an in-house business change management process called 'Change Master', facilitated through Cranfield University, that focuses on the human side of change dynamics, from strategic engagement and leadership planning through to outcome setting and incentivisation."

Carter added that the move towards providing the MediaCity 'embedded resource' model throughout the estate will take place over the first 12 to 18 months of the contract.

In February of this year, the BBC announced it had selected six organisations to bid for what it called "one of the biggest and most prestigious total facilities management contract opportunities in Europe." Along with Interserve, the broadcaster heard bids from Babcock Group, Balfour Beatty, JCI, Mitie and Sodexo.

Interserve already has an established relationship with the BBC, having secured a construction framework with the broadcaster in 2006, which was re-secured in 2010. Interserve has delivered approximately £40 million of projects through this framework to date.

The new FM contract also includes the option to extend for up to four more years.

Director of the BBC's Facilities Management re-procurement project Alan Bainbridge said: "The vision and better value offered by Interserve made them the right choice for this important contract.

"The ambition for the new contract  will ensure our buildings - both old and new - are places which foster creativity, helping people deliver their best, most creative work, and which are welcoming and open to audiences.

"This will ultimately deliver quality and best value to licence fee payers."