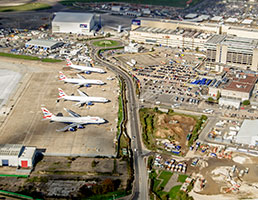 Carillion has signed contracts worth more than £5 million in the transport and aviation markets, including one at Heathrow Airport.

Following a competitive tender process Heathrow Airport Limited (HAL) awarded Carillion a one-year contract to provide soft and hard services at the Voyager House offices in the airport complex. The contract, which began in January, sees Carillion further cement its partnership with HAL, where it has supplied a range of FM services since 2009.

Carillion has also gained an extension to a contract with London Overground Rail Operations Limited (LOROL) for a range of soft and hard services including helpdesk to the existing 57 stations on the network. The new 18-month contract, starting in May, will see Carillion service another 24 stations on the West Anglia Line.

c2c Rail has also extended its long-standing rail contract with Carillion, which has been in operation since May 2008. Carillion will continue to provide hard services to 26 stations on the Essex Thameside rail route as well as the c2c Rail headquarters in Cutlers Court, London.

Rick Murphy, customer business director for transport and aviation at Carillion, said: "Our recent successes in this sector have stemmed from our existing relationships with our customers and are underpinned by our partnership approach to service delivery.  This is a real credit to our teams on the ground who have been delivering consistently excellent services to our customers over many years."