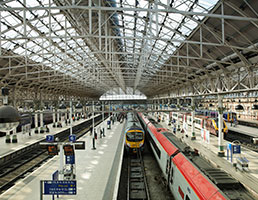 Under the terms of the nine-year deal, which includes an option to extend for a further year, Carillion will be responsible for facilities and associated services across 460 stations in the north of England for Arriva Rail North, the winner of a northern franchise currently held by Northern Rail.

Arriva is set to take over the franchise in April 2016, when Carillion's work will also begin.

The company is also set to provide helpdesk services, while the contract also includes the option to extend to station improvements, train cleaning, and depot FM services.

Earlier this year, Carillion won an extension to its facilities contract with London Overground Rail Operations Limited. The firm continues to provide hard and soft services across the network's 57 stations.

It also has extended its deal with c2c Rail, which Carillion has held since 2008.