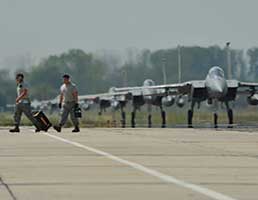 Interserve signs up for Navy deal

Interserve has been awarded a five-year contract worth about £230 million, including additional works, with the Ministry of Defence's (MoD) Defence Infrastructure Organisation (DIO).

The company will provide facilities services to the United States Air Force's estate in the UK.

Interserve will carry out a combination of total facilities management and engineering services maintenance for three operational wings of the USAF:

The five-year partnership begins in November 2016.

Many of the sites Interserve will manage have previously outsourced support services - this is the first time that the USAF estate will be managed by a single provider.

This amalgamation of contracts is designed to drive greater efficiencies, allow flexibility to accommodate changes in estate requirements and funding in the future, while providing vital support to US Air Force military operations and training.

Adrian Ringrose, chief executive of Interserve, said: "Bringing the United States Air Force's facilities management under a single arrangement is a significant undertaking, but one which will undoubtedly deliver real synergies and greater flexibility for our client. We look forward to expanding our long-standing partnership with the Defence Infrastructure Organisation and to building a strong relationship with the US Air Force."

Interserve has a history of partnership with the DIO, providing FM services and managing projects for the UK military training estate, equivalent to more than 1.5 per cent of the UK's land surface.

In 2014, Interserve's Landmarc Support Services arm won a £322 million contract with the Ministry of Defence to managing its National Training Estate Prime contract over a five-year period. The contract is in addition to a £15 million deal with the Royal Navy, won in partnership with ESS Support Services.