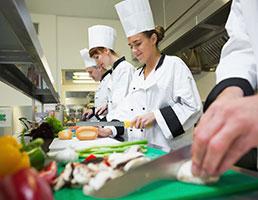 The National Living Wage could be hampering productivity in low-wage sectors including catering, according to research published this week by a think tank.

The report, Boosting Britain's Low-Wage Sectors: A Strategy For Productivity, Innovation And Growth, by the Institute of Public Policy Research (IPPR), stated that productivity was being affected because employers were moving to offset higher wage bills.

It said "tentative evidence" indicates that firms are instead seeking labour-cost reductions by, for example, reducing overtime pay.

Workers in these sectors tend to be less well qualified than those in Europe, and UK firms are less likely to offer training to staff, states the IPPR research. The report suggested that employers should invest more in training, innovation and technology to increase the productivity level of low-wage staff and that firms should innovate or make their business models more efficient.

Since the recession of 2008/09, the UK has been dogged by slow productivity growth, which has been exacerbated by restructuring of the economy away from high-productivity sectors such as manufacturing towards low-productivity ones, such as accommodation and food.

The UK's low-wage sectors, including retail, accommodation, food and administrative services contribute to the problem, since on average they are 29 per cent less productive than the economy as a whole.

Guy Stallard, director of facilities at professional services firm KPMG, said: "I am surprised by the report.  FM firms that support the voluntary living wage have financed higher wages through benefits arising from greater productivity and service quality."