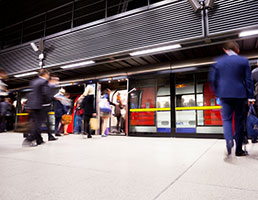 Lanes Group plc has won a contract valued at £65 million to provide facilities maintenance services for the London Underground.

The five-year contract, with an option for a three-year extension, is the third maintenance contract awarded by Transport for London (TfL) to Lanes Group in four months.

Lanes has been re-awarded previously held contracts, and won additional work, increasing the amount of assets it is now responsible for maintaining by 40 percent.

As a result of the TfL contract wins, Lanes Rail commercial director Matthew Todd is joining the main board of Lanes Group, while senior project manager Huseyin Ibrahim is promoted to a new post, TfL project director.

Lanes Rail has built up significant expertise in delivering targeted maintenance programmes based on its in-depth understanding of TfL's rail assets.

The Bundle 3 Lot 2 contract is due to go live in June.

Lanes Rail had previously won the Lot 2 drainage contract for Sub-Surface Lines (SSL) and Bakerloo, Central and Victoria Lines. It had also been re-awarded Lot 3 contracts to maintain structure and drainage assets associated with the Jubilee, Northern, and Piccadilly lines.

As a pan-TfL contract, it also qualifies Lanes Rail to bid for other maintenance projects relating to other TfL assets.

When combined with the two other contract wins, it will increase the annual turnover of Lanes Group's rail division, Lanes Rail, by 30 percent.