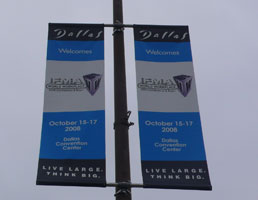 Dallas's new slogan Live Large.Think Big sums up not only the city which hosted this year's Ifma World Workplace but also the conference itself. Sustainability was a recurring theme but the delegates and organiser continued to "live large". The shuttle buses which ran every 10 minutes throughout the day taking delegates from the Convention Center to the conference hotels (none more than a 10 minute walk away) being just one example of excess.

Much was made in the programme about last year's event being certified by the Leonardo Academy as a cleaner and greener event and Ifma promised to offset 100 per cent of emissions from the 2008 conference. It encouraged individuals and organisations to donate money or in-kind donations of emissions reductions to help to offset emissions. But the message is all about offsetting and not about reducing emissions in the first place.

Despite that, it's hard not to be drawn in by the enthusiasm the (largely) American audience show for their FM industry and an event which successfully Thinks Big. Presentations from the likes of Meredith Thatcher and Tanya Irvine from the Canadian-based Carroll Thatcher Planning Group looked to the future and predicted that the workplace would be unrecognisable in 12 years time. "There will be an IT revolution by 2020" said Irvine. "Technology will be 10,000 times more capable than it is today. We are in the dark ages."  They forecasted an increase in the fluidity and flexibility of the workforce; the blending of home and office; more automation; more demanding workers; the decentralisation of urban centres; and an increase in multi-culturalism. "But 12 years ago we had no idea how the internet would take off and revolutionise the way we work, so who knows what will happen by 2020?"

The changing nature of work, the worker and the workplace was a theme picked up by Phillip Ayoub, a researcher at Steelcase, in his presentation on Generations at Work. Himself a Generation Yer, Ayoub argued that work-life balance was a Generation X obsession and that Generation Y was more focused on work-life integration. "Generation Y are happy to take work home as long as they can take home to work," he said adding that Gen Yers were expert multi-taskers managing jobs, study and hobbies in a way other generations hadn't managed - mainly because they got married and had children later.

Generation Y workplaces needed to be diverse with lots of different types of space to allow multi-tasking and different ways of working. "This is the generation which has spent four years studying lying down. They don't want to be constricted into working in an ergonomically-perfect chair."  But Ayoub warned that collaboration and working in teams did not mean constant interaction and physical contact. "People miss the Do Not Disturb space. They have to leave their office when they are at their most productive because they can't concentrate. Are we supporting our people when they are at their most creative?"

And the local Starbucks isn't the only place we go to get away from the office buzz. Keynote speaker Jonas Ridderstrale, the author of Funky Business Forever: Talent Makes Capital Dance, argued that "In this stressful, hyper-competitive world the toilet is one of the few places where it's legitimate to be alone. Solitude is scarce, the toilet is a minature spa where we go to escape."

Going back to basics was a theme echoed throughout the four-day event. Opening keynote speaker Stanford University professor Chip Heath described FMs as the decathletes of the business environment because of the complexity of their jobs. But the key to making ideas stick - with clients, fellow professionals and the board - was to keep them simple. He cited the example of American president John F Kennedy saying in 1961 that within the following decade America would send a man to the moon and bring him back to earth as a simple idea which stuck. "If you say 10 things, then you say nothing. You need to keep it simple so people understand the core message."

The simplicity theme was picked up later by Bob Mackenzie from Washington State University who argued that the key to operating champagne facilities on a beer budget is having a plan; getting a good preventative maintenance plan in place; and identifying and maximising your resources. "The champagne resolution is usually a simple one" he said citing the example of a high school where the cleaning staff were plagued by students fixing their lipstick by kissing the mirror. "The solution was to explain to the students that the mirrors were cleaned with a mop which was put down the toilet pan."

Preventative maintenance is the straightforward solution to getting the best out of your FM budget. "We proactively maintain our family through good nutrition, inoculations and check-ups and we need to inoculate our facilities in the same way." Sometimes just using a simple analogy like that to the board is the key to getting the message across, he said.

Ridderstrale argued that facilities professionals need to be more passionate about what we do to sell FM. "Hire people for attitude and train them for skill," he recommended. "You don't hire a hells angel and then train them for attitude.


Fluor HQ facility visit
The 140,000 sq ft headquarters of chemical giant Fluor in Irving, Texas gives more than just  a nod towards sustainability. The site, which achieved Leed NC certification when it opened in March 2006, was one of six facility tours offered to Ifma delegates during World Workplace and attracted almost 100 visitors.

Fluor had an early commitment to Leadership in Energy and Environmental Design (Leed), the US equivalent to Breeam, explained Ted Coliho from Gensler, the project's interior architectural partner. "But sustainability had to make business sense, not add to the cost and not slow the project down. We're not leading edge green, that wasn't the point" he says, reflecting the majority attitude towards sustainability at this year's World Workplace.

The two block three-storey building was completed in just nine months from the site being purchased. In distinct contrast to many buildings on the nearby Dallas skyline, the Fluor HQ sits sensitively in its surroundings.  Clad in Texan limestone with Texan Mesquite flooring inside, much of the materials used were procured "regionally" (a 500-mile radius in US-speak). Twenty per cent of the construction material, by weight, was made from recycled content and half the construction waste was recycled.

But it's the exterior of the property which makes the biggest impact. More than 30,000 indigenous plants, which require little water,  grace the extensive site - the company won Leed points for not creating a low rise structure and concreting over the entire area, much is preserved in its original natural state. Where irrigation is required it comes from storm, rather than potable, water. Sadly native plants mean native pests and the day of the World Workplace tour  the recently-plated chilli plants had been eaten by rabbits. Staff are encouraged to enjoy the site (lovely in October, but probably more of a chellenge in the height of the Texan summer). There is a local hiking and jogging route and Fluor introduced bicycle storage and changing rooms to encourage people to cycle to work  - again something which earned them Leed points.

The extensive use of glass means that the natural environment extends into the building, which is home to almost 300 people with an average of 175 a day. It caters for a large number of visitors who need to hotdesk and there are a variety of places to work from 137 enclosed offices and 134 workstations to 18 conference and board rooms of different sizes. Because of the considerable  distance to the city of Irving, the site aims to be a full service facility with banking facilities, a 1,600 sq ft fitness room, and a 6,500 sq ft canteen plus an executive dining room.

Although there have been considerable technical developments in the two years since the site opened, it still has high-efficiency appliances, lifts (and people are encouraged to use the stairs), lighting and window glazing in addition to increased building insulation and solar shading for othretwise exposed areas. All of which allows Fluor to save 20 per cent of its energy bills compared to the industry standard.

Security is a major issue for Fluor but is handled sensitively. The site was designed away from the road to be more secure and natural stone blocks have been placed along the side of the building to prevent it being xxxx.  Almost 50 cameras are discreetly tucked into every nook and cranny.

The Fluor HQ is the first corporate HQ in the region to be Leed certified and the FM team is starting the process towards Leeds EB (Existing buildings) certification. Compared to many buildings in Europe, it could have done a lot more, but in a country where sustainability is in its infancy it is a good example of what can be achieved - especially in the challenging climatic conditions of  Texas.