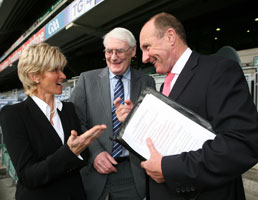 A regulatory watchdog to monitor issues surrounding apartment buildings, developers and FM providers is nearing creation in the Irish republic, and none too soon.

A major issue is the woolly laws governing who owns what areas in the increasing number of multi-residential apartment buildings that are springing up across the republic.

There are few strict rules governing responsibilities of buyers of apartments and a building's developers. It can be a minefield for FM businesses contracted to clean common areas and maintain fabric in such an ad hoc legal environment, the 150 delegates to this year's Irish Property and FM Association conference in Dublin heard.

Property Services (Regulation) legislation is before the Houses of the Oireachtas, the Irish parliament, but as yet there is no date for when it will be passed as a law, several speakers said.

However, the creation of the rules and how they will affect organisations with a stake in a so-called "multi-unit development", known as MUD, was the central theme of the IPFMA conference. The aim of "Seeing through the MUD", as the conference was called, was to clear up what the new rules will mean for developers, owners and FM services providers.

When the Property Services Regulatory Authority gets set up with regulatory powers it will oversee and mediate to see all parties adhere to new rules and regulations, said Thomas Lynch, to be chief executive of the PSRA when it gets legally constituted.

Importantly for FMs, it will also operate a comprehensive licensing system covering all property businesses from estate agents to property landlords. At the moment, anyone can set themselves up as a landlord, he said.

Under the new regulations, a multi-unit developer will also have to set up - at their own expense - a legal entity called an Owners Management Company, of which the developer is a shareholder until the apartments are sold off. No apartment can be sold unless an OMC has been created.

New apartment owners have a share in the OMC. The developer's share will diminish as apartments are bought. Until then, the developer can never walk away from their responsibility for their share of maintenance.

It is the OMC that has the legal responsibility to contract FM service providers to maintain common areas and building fabric.

Having an OMC system will put Ireland in the forefront of most European Union countries when it comes to monitoring apartment building responsibilities, Lynch told delegates.

The importance of creating an OMC is highlighted by the fact that of the 40,000 new dwellings set for Dublin alone by 2016, three-quarters will be apartments, said conference chairman Siobhan O'Dwyer.

"More and more facilities managers are getting involved in the maintenance of apartment buildings," she told FM World.

When economic times were better in Ireland, people were buying apartments unseen and often only in their design stage, explained O'Dwyer, founder of property and FM business O'Dwyer Property Management and who led IPFMA submissions to the government for creation of the new rules.

When prices of dwellings were rising exponentially in many cases, there were fewer issues of quality of build and the accompanying maintenance and repairs. People were happy to throw money at problems. But now that money it tighter, apartment owners developers and construction firms are wrangling over who pays for what.

Too often it is the apartment owner footing maintenance and repair bills for poor construction in first place, she said.

Also, when FM providers are called to buildings they too often find the plans they have obtained from owners, builders or developers are not up to date.
Everything from fire exits and emergency lighting to location of windows and doors differ from the plans.

This is because currently buildings get their fire safety certificate before being built, said Colm Traynor, a fellow of the Institution of Ireland and until recently the assistant chief fire officer with the Dublin Fire Brigade. The new regulations will put an onus on the managing agent to make sure that plans match the certificate or they will have to get it sorted, he told delegates.

While many delegates were getting to grips with the new rules, an opinion piece in the day's edition of the Irish Times called for the abolition of the PSRA even before it officially gets off the ground.

There are already enough regulatory bodies, as pointed out by the Law Reform Commission. But the PSRA was created and funded at a time when money was not tight, the article said. The PSRA "quango" with its eight staff of senior civil servants have "had a relaxing 32 months" to settle into its new, and highly sought-after offices.

Despite the criticisim, the article noted the new legislation should do much good to end some of the questionable practices by a few agents. "For a start, agents will not be able to award contracts to service providers they have an interest in." Transgressions could cost more than 25,000 and loss of their licence, for good.