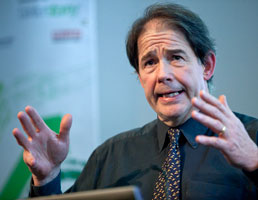 The second seminar on Life and Work in 2020, organised by Advanced Workplace Associates explores how climate change could bring opportunity in the future

Successive governments haven’t been smart about the way they have communicated climate change to business. That was the message from Jonathan Porritt, founder of Forum for the Future speaking at the second seminar on Life and Work in 2020, organised by Advanced Workplace Associates (AWA). “It’s become a drab debate where climate change is portrayed as an apocalyptic vision of hell which destroys our whole world.”
There’s a perception that climate change is going to make our difficult business lives even more difficult, he said. “The government doesn’t talk about the upsides – the job creation, how factories and manufacturing facilities will change and the wealth creation,” he told the group of senior facilities and workplace professionals. “But the debate will change. In 2020 we will look back and question why climate change was so masochistic, so costly and was all about beating us with a big stick, rather than the other way.”

The retrofit and refurb business would benefit most from the 80 per cent reduction in greenhouse gases by 2050, Porritt said, citing the likes of Carillion, Balfour Beatty and Skanska as examples of companies who were just waiting for the existing models to develop before developing more into this market, in addition to new entrants. Technology in new builds was all very exciting, he added, but as 60 per cent of our buildings today will still be in use in 2015, the focus needed to be on bringing those facilities up to a low carbon standard.

As a result business would benefit from substantially reduced operating costs, Porritt added, citing figures from the Carbon Trust that showed low carbon economies bringing a £4.5bn net contribution to UK plc. “So why does everyone talk about climate change being a matter of cost? It’s a huge boost to increase efficiency, effectiveness and competitiveness.”

While new sophisticated technologies in lighting, heating and ventilation were essential, it was the low-tech solution that was most important – the way buildings and energy were used and managed, added Porritt, laying responsibility firmly at the facilities manager’s door. Architects also had an essential role to play at the start of the building’s life: “Architects emerge from their ivory towers practically blind to the reality of designing for a low-carbon future.”

A changing landscape
Zahl Limbuwale, chair of the British Computer Society’s datacentre special interest group, acknowledged that datacentres were the worse offenders in terms of energy use in non-domestic buildings. “We are not efficient as an industry, less than 1 per cent of the energy taken from fossil fuels is used effectively by central processing units in datacentres.” The embodied energy in ICT equipment is so complex that it’s currently almost impossible to measure, he said. AWA’s Andrew Mawson, chairing the following discussion, challenged both speakers that the way to reduce your carbon footprint was to use your building stock more effectively: “Increasing occupancy of a building by encouraging hot-desking and increased flexible and mobile working means that you can reduce the amount of buildings that you occupy and automatically reduce your carbon.”

The 2020 seminar series aims to build a picture of how life, work and the workplace will be in 2020. The inaugural seminar, focused on the likely macro-economic, demographic and social context for the UK in the world in the next decade, took place in April; the second explored the future of sustainability; and the third, to take place in late September will look at technology and will be reported exclusively in FM World and at www.fm-world.co.uk


Predictions for 2020
Jonathan Porritt
• China will dominate the world in clean technology
• The UK will lead the world in offshore wind and marine technology
• The Green Investment Bank, being created in 2011, will have delivered £150-£200bn
• The refurbishment of non-domestic buildings will be a multi-billion pound business in its own right
• The roofs and facades of non-domestic buildings will be prime assets in their own right and will be covered in renewable technology

Zahl Limbuwale
• Constant hunger for on-demand technology will not change. It will drive IT to become a utility
• 80 per cent of non-specialised businesses and consumer computing will be provided by autonomonic mega datacentre
• 90 per cent of ICT hardware is fully recycled and reused
• ICT energy use grows to 15 per cent of total energy use in the developed world and reduces CO2 in ICT-enabled processes by 80 per cent
• First organic computers arrive meanwhile mainstream hardware in datacentres becomes specialised, liquid cooled, high density devices