Northern Ireland FMs urged to rise to the challenge 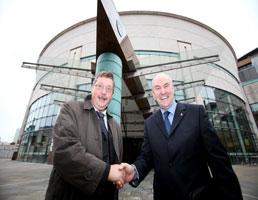 Northern Ireland’s Executive wants facilities managers in both public and private sectors – to help with ideas about setting an economic recovery programme for the province.

In his opening address to the 14th BIFM Ireland region conference, Northern
Ireland Minister of Finance and Personnel Sammy Wilson, urged facilities managers to
contribute to a recently set up consultation recently and from which the
Executive will use a basis for setting out a recovery strategy.

Northern Ireland government has enjoyed around a 6 per cent budget increase
over the past decade, Wilson said. But now, as with other UK governments
and councils, it faces severe budget cuts. Whatever choices are made, they
will all have to be made quickly because the pressure is on all executive
departments.

Wilson told the 150 delegates, gathered at the Waterfront conference centre, that cutting facilities budgets as a way to save money is a false economy. A well-run facilities management department is exactly where savings can be generated.

But beware, he said. There will be no so-called quick-wins. It will be a long-term solution with accumulative results. “The challenge for people in my position is to in turn challenge the way things have always been done,” he said.

Too often people who do challenge processes are not listened to, said Julie Kortens, head of FM at Channel 4 – and this year’s Facilities Manager of Year award winner at last month’s gala annual BIFM awards night in London. If people are allowed to challenge and allowed to be creative, the payback for an organisation is immense, she said, during her presentation.

The remit of C4, which came from Parliament, is to allow a diversity of voices that might not get heard elsewhere in the media. To do this, the station has to be creative, innovate and experimental. The FM department, said Kortens, took this to heart. At Channel 4, “FM is not a back office but part of the DNA of the organisation”.

Kortens looked around and realised that apart from the creative and media production units, FM underpinned everything that the channel does. But FM needed to be creative as well.

She gave her staff -- nine-in-house and 121 outsourced – freedom to be creative. When they buy in goods and services, she urged them to be “a little more funky”, she said.

There was initial resistance to erecting the now iconic huge “4” in front of the London headquarters, she explained. Security thought it might be a terrorist threat and health and safety was concerned kids might climb on it, not of which has materialised.

Instead, tourist buses make regular stops at the building to allow photographs. A receptionist, who was always answering visitor questions about the “4” suggested the channel produce a leaflet about it, and she also helped marketing put it together.

As well, the channel has very little studio space, so FM helped redesign the staff restaurant – a traditional table-and-chairs area – into a highly flexible space. It now can be transformed into a formal reception venue and also a presentation studio for airing live awards and other events.

To show facilities managers is not a reactive, back-office function it should be embedded in
the planning processes of the business, said Ian Cramp, director of Sigma FM. Get to know what your organisation’s business plans are for the next two years or more and see how you can help them reach their goals.

Given the tough market conditions, few businesses welcome surprises. Cramp suggested that facilities managers consider doing specific ‘audits’ of equipment from boilers to building fabric, to see how well the systems will stand up in the next 12 to 36 months at least.

Importantly, facilities managers should share this information, even though the audit may be
bad news regarding failing equipment. But this risk management will allow the organisation to better plan for the unexpected, Cramp told delegates.

In the next several years, environmental legislation will increasingly focus FMs minds, Colin Malcolm, principal consultant at Environment Workplace Law, told delegates. The sector should look out for more cap-and-trade schemes, such as the recent introduction of Carbon Reduction Commitment.

The principal will be on “polluters pay” rather than increased non-discriminatory taxes, said Malcolm. The effect is to make polluting the environment more expensive that investing in technology and services to cut down on an organisation’s pollution.

Many firms might consider polluting the environment if the fines remain low, said Malcolm. But this is playing with n organisaton’s corporate image, and facilities managers should remind the most senior management what the real cost of polluting is. A £300 fine could translate into millions of lost business because supplier selection demanded a clean environmental track record.

Also costly for a business is paying out for a state-of-the-art eco-friendly building with all the bells and whistles to save energy, only for it then to be poorly run. That is nothing less than money down drain, said Neil Hewitt director of the Centre for Sustainable Technologies at the University of Ulster.

But poor energy management of a building may not be through lack of understanding by a beleaguered FM and his or her team. The design may have been wishful thinking in the first place, or unforeseeable factors may have come into play since the building was designed and built.

Nonetheless, he said, FMs will have the operational knowledge and this must be routed back to designers to improve future designs. “FMs have to be more vociferous about going back to the designers.”
Also filed in:
Topics
News
Content
Professional Performance
Sectors