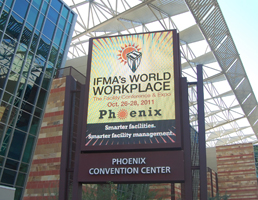 
With plenty of other sessions to choose from, it was gratifying that over 100 people
chose to join the workshop. Global FM put together a panel representing several
countries and continents as well as different perspectives.

Lo recalled that people really appreciated the value of FM in 1997 when the
economic crisis hit, but he believes FM can thrive in better economic times as well as
during adversity. He sees tremendous opportunities in Asia: "The emphasis has been
on speed of development but in the next phase it will be on quality."

Caravatti-Felchlinn was clear that FM is making strong progress, with new FM
divisions established at the same level as core functions in many organisations: "FM
can influence profitability through optimising space and services," she said.

There are two sides to the FM story, said Jones. While outsourcing of FM has picked
up in some markets, capital projects are being pulled on a regular basis.

Strup, meanwhile, explained that in the Czech Republic and other eastern european countries there is confusion and potential conflict with asset management. For him it is clear: "The problems of people in buildings is for FMs to deal with."

Citing research undertaken with the Copenhagen Institute of Future Studies, Peter
Ankerstjerne of ISS said sustainability is moving from "something talked about to
something we live on a daily basis".

The World Cup in 2014 and Olympics two years later will raise the profile of FM
in Brazil, said Mauro Campos. FM is still not really recognised in the country, but
Abrafac is working hard to change that. Of the 250 people attending the international workshop in São Paulo, held the week before World Workplace, for maybe a third it was the first time they had connected with FM.

The wide-ranging discussion following the opening shots from the panel touched on
the potential conflict between FMs wanting to take a longer-term view and a C-suite
focused on shorter-term returns; the commitment of governments and business to
sustainability in the face of cost pressures; the merging of FM and real estate.

He urged FM professionals to co-ordinate on a global basis to ensure governments
take action that is well thought out.

The FM capability was created in 2008 from the existing IKEA maintenance
operation. In addition to retail, FM covers purchasing and distribution. IKEA has 316
stores across 38 countries, this is truly a global operation.

Within IKEA, FM is defined as the management and maintenance of a good
environment for sales growth. FM supports sustainable business development at the
lowest possible long term cost. The vision for IKEA FM is: "To give the best support
to core business throughout the building life cycle," said Ohlsson.

She said that the previous operation had delivered from go-live of a store to disposal,
but FM can make a difference much earlier in the process - during acquisition,
construction and handover.

To understand what is happening across the portfolio, every FM has completed
a simple benchmarking survey for the past four years. These have revealed wide
variations in cost and performance, despite the fact that IKEA's stores are all very
similar.

In creating IKEA FM, Ohlsson said that the first building block was not simply to
define FM, but to position it within the organisation. Next, it was important to establish communication channels.

IKEA has a very strong brand and ethos, but it does not necessarily dictate how things
should be done across all its territories. However, it does define output very clearly
and requires it to be achieved.

These reports have given just a flavour of World Workplace. If you'd like to
experience it for yourself, the next event is in San Antonio, Texas (31.10 to 2.11
2012).

Talking of keeping buildings cool, how about an entire sports stadium? Chase Field, home to the Arizona Diamondbacks, was the venue for the World Workplace Welcome reception. The stadium is a spectacular arena with a retractable roof, a swimming pool for fans with deep pockets, an old warehouse built into its facade and  air conditioning.

On game days, the roof is left open to help grow the natural grass that is used on the playing field. Should sunlight prove to be insufficient, requiring more light on some days, large incandescent lights provide a substitute. It may not be green, but it's certainly impressive.